Getting started with Selenium Grid

Sometimes we might end up with the need to run our Selenium tests on a different machine. The reasons why we might want to do this could be many. Here are a few reasons :

Ok so enough of stories.. :) Here’s what you need to get a Selenium Grid up and running.

You don’t need all of the above. It depends on what platform you are going to be running your Grid setup and also depends upon what browser flavor you would like to run tests against. For e.g., if you dont have a OSX, then you pretty much cannot include Safari. If you have only Linux boxes at your disposal, then you don’t need either the IEDriverServer (or) the EdgeDriver because they are windows only binaries.

How to configure the driver binaries

The driver binaries (chromedriver /geckodriver/safaridriver/iedriverserver/edgedriver) are what helps selenium interact with the actual browser. These binaries are now built and released by the respective browser manufacturers themselves because they know their browsers better than anyone else. Selenium relies on these binaries to talk to the actual browser.

In general there are two ways in which you can configure driver binaries.

Starting the Hub and Node

The hub can be started via the command:

This causes the hub to be started and listen on port 4444.

The node can be started via the command :

This spins off a node with the following features :

The journey of a test case

When your test tries to talk the Grid here’s how the flow happens:

Here’s a pictorial representation of how does your selenium instructions flow across all the systems. 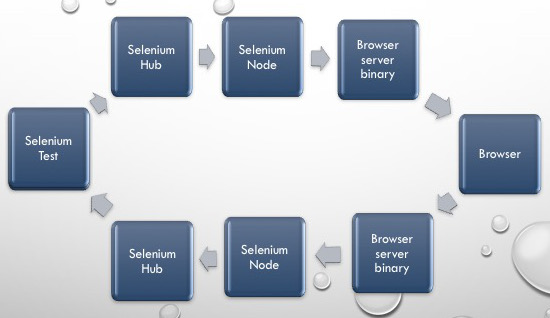